MIAMI DREAMS, Layla's sexy new contemporary romance, is now available at all major retailers. It's pretty hot, just like Florida summers, and I'm posting chapter one below for your reading pleasure. It's only 99c for a limited time. Enjoy the read! 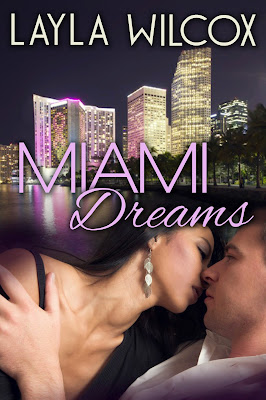 “Mmm, good morning,” she murmured, and tried to push his fingers inside her.

“Not so fast,” Eric said, pushing her hand away and gently rolling her over on her back. He disappeared under the sheet, and she felt his tongue laving over where his fingers had just been. He explored every surface, tasting her with long, slow sweeps until her hips rose high off the mattress and she dripped with anticipation.

He sucked her protruding nub while pressing two fingers inside her. The bed shook as Deena alternately raised her hips against his lips, then bore down to drive his fingers in deeper. She pressed her thighs together around his hand and clenched her insides around him, trying to increase the friction and bring herself over the top. Finally she felt the contractions begin and the gush of her juices flowing.

Eric placed his mouth over her opening, savoring every drop of her as he ran his tongue in and around each of her folds. When he was done, he looked up at her from between her legs.

“I love having pussy juice for breakfast. But that’s just an appetizer for me.” He pulled himself up onto her and guided his erection between her legs.

“Let me catch up to you before we start the main course,” Deena said. She pushed him on his back, and turned herself around to hover over him. Her knees pressed into the pillow on either side of his head, and she spread her pussy over his mouth.

Deena took his hardness in her hands and stroked his silken skin upward until she saw clear fluid emerging from the tip of his erection. She lowered her face to lick the sweet liquid that oozed out while lowering her bottom onto his waiting tongue, so that they connected to one another in perfect unison.

“Oh, how I love that sweet stuff,” she murmured, and licked across the engorged head of his cock and down along the sides of his swollen shaft. When she felt him twitching with desire, she took him deep into to her mouth, cupping his sac in her hand.

Eric’s fingers probed her insides, pushing her toward explosion once again. She felt his balls contract and knew he was close, too, so she pulled away.

“Let’s not come yet,” she said, as she swung around to sit on his erection. Her wet pussy easily accommodated his rock hard cock, and she slid up and down like she was riding a bucking bronco.

Eric grabbed her butt and brusquely shoved her down on him, raising his hips up each time to plunge in ever deeper. They panted and heaved, crashing down on the mattress over and over, until finally they clung to one another and climaxed with a communal shout.

Deena collapsed, her head on Eric’s chest, and immediately fell back to sleep. When she awoke, she lifted her head to check the clock.

“Oh, shit, Eric. It’s almost nine o’clock. God, I have to pee.” She rolled out of bed and bounded into the bathroom. After relieving herself and washing up, she came out and saw Eric still sprawled out on the bed as she had left him.

“Hey, you, sleepy head! You are way late for rounds this morning,” she called as she ducked into her walk-in closet. She slipped on her yoga clothes. She’d have to take the late morning class at the club, but it was better than skipping yoga altogether. She never felt right on the days she missed class.

“Eric, I don’t hear you moving,” she called as she sat at the vanity table in her closet and brushed her long dark hair back into a ponytail. She stood up to admire her reflection in the walk-in closet’s three-way mirror. She frowned as she pressed her hand against her protruding belly. No matter how much she exercised or dieted, she always had a bulge.

She listened for Eric in the shower, but didn’t hear movement at all. “Eric, are you up?”

Silence met her question. She poked her head out of the closet doorway and saw her husband still in the same position.

“Eric,” she said sharply, but still no movement on the bed. “Eric, you’re frightening me,” she said with a forced laugh, waiting for him to jump up and try to scare her. When he remained still, she inched over and sat on the edge of the bed.

“Eric,” she said softly and stroked his face. She retracted her arm like she had touched a burning stove, when in fact his skin felt icy cold. “Eric,” she screamed and shook his arm, but he was stiff and unresponsive.

Deena jumped back in horror. “Oh, my God, I’ve killed him.”